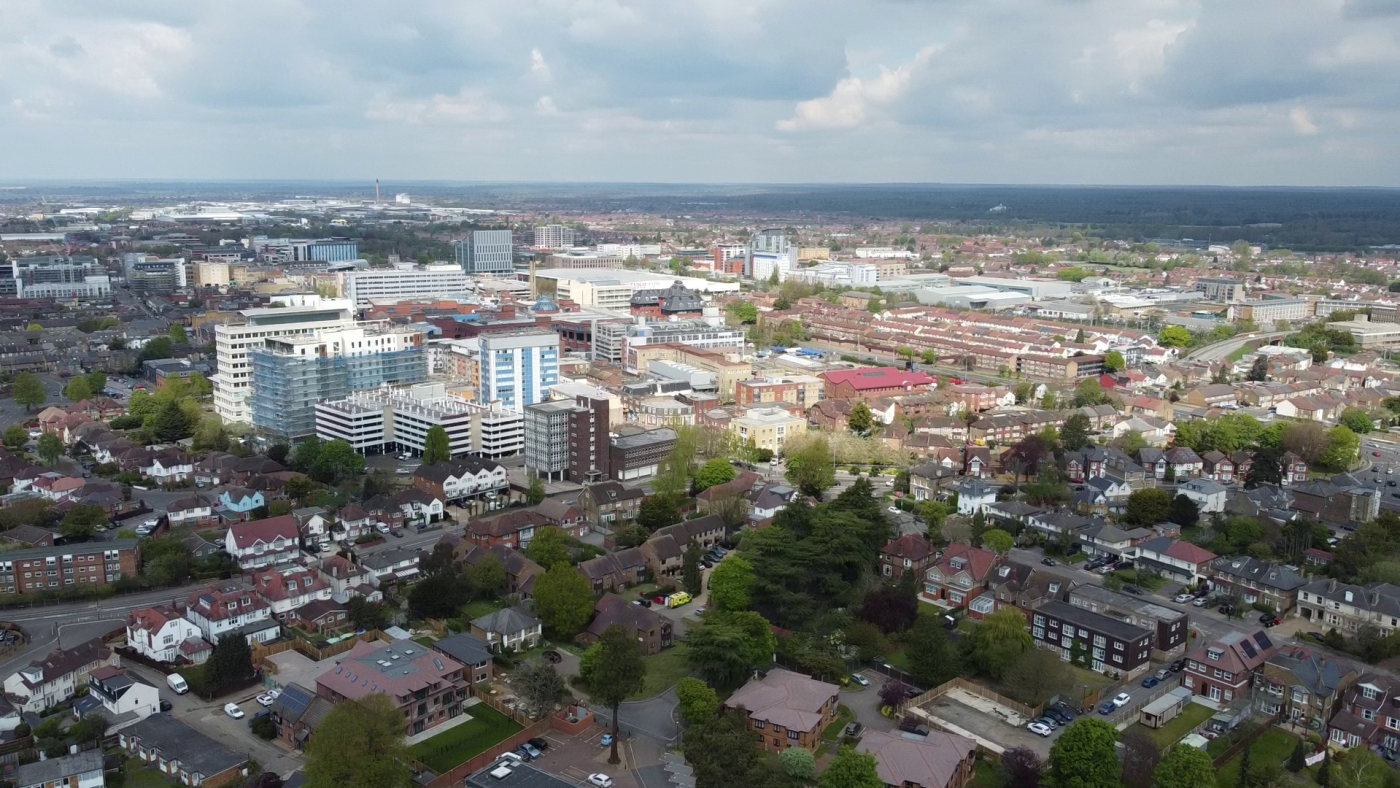 Most of the area around the town we now know as Slough was formed over many years by combining villages along the Great West Road from London to Bath and Bristol.

The first recorded use of the name occurred in 1196 as Slo, then as Sloo in 1336 and Le Slowe Slowe or Slow in 1437. The name is thought to derive from the many sloughs in the area – rainwater flowing from the Chiltern Hills to the River Thames.

Around the middle of the 17th century, stagecoaches passed through Slough on their way to Bath and Bristol in the west. This led to a rise in Coaching Inns, such as the Crown in Slough and the Windmill and Castle inns nearby Salt Hill. Many of the Coaching Inns in the area survived and are still used as public houses today.

In 1863 Slough became a local government area for the first time when a Slough Local Board of Health was elected to represent what is now the central part of the modern borough.

In the early 1970s, the main A4 was routed through Slough, which allowed for the building of a major shopping complex, Queensmere, between the High Street and Wellington street and adjacent to the re-routed A4.

In 1974 Slough became part of Berkshire as part of the local government reorganisation. Then in 1998, Slough became a unitary authority, creating a Borough by the town’s third Royal Charter.

In 2014, we were presented with a significant opportunity to design the Town Centre Redevelopment of the Queensmere Shopping Centre. The faith of the developer and development director was gratifying. However, it meant we had to rise to the occasion and design a scheme that would both fulfil the developer’s aspirations and satisfy the planning department.

We made several site visits to understand how the site operated for both customers and retailers. The fundamental problem was that the A4 Wellington Road cut off the High Street from the train station, which was the issue the planners needed us to solve.

We designed and developed the scheme with a new permeable façade along Wellington Street. Following CABE design reviews, the scheme was presented to the planning committee for their comments. Regrettably, this first attempt was not viewed favourably, though the committee did understand and appreciate the rationales of the design and asked for it to be amended and presented at a later committee meeting.

The developer had expected the meeting would be to discuss the next steps rather than to review an alternative design. Instead, the key points of the revised design were discussed, and the concept was tabled. The Head of Planning and Development Manger clearly found the concept interesting, and they felt the scheme was now aligned with the local authority’s aspirations.

A month later, the concept scheme was presented to the committee, who also liked the new design concept. A few months after this, the planning committee approved the final scheme for 675 new apartments and an extension to the retail area to provide a new façade that interacted with Wellington Street.

This success led to the following schemes in the Borough:

Overall, GAA Design has gained consent for over 1500 apartments in the Borough.

Slough Borough Council and the future

In the summer of 2021, Slough Borough Council filed a Section114 notice, effectively declaring the authority bankrupt. With strict monetary measures in place, the running of the council became problematic.

The impact on the planning process was also causing issues across the borough. The financial restrictions caused significant delays for us at GAA Design, including getting approvals for third-party consultants.

An example would be the authorisation of assessments of financial viability appraisals which is now taking between six and ten weeks to get signed off. The result is that an applicant could miss three planning committee meetings. As construction pricing is currently volatile, this is causing some concern.

More immediately, Slough has more pressing issues to tackle. The borough has policies in place to achieve zero parking in town centres. However, the norm has been to provide parking as the committee has been unable to agree schemes without parking provisions.

This is against the backdrop of increasing traffic movements in towns. Prior to the Covid-19 pandemic, there was evidence to suggest that Slough only had five years of capacity left in its highway network at the current growth rate. Post covid this has eased, but the issue remains.

Since the borough council filed a Section 114 notice last summer, there is hope that significant changes at the council will see a new strategy to combat these problems. Schemes with little or no parking in town are being welcomed, and strategies involving car clubs and shared parking in town centres are being considered and readily accepted. There are plans in place for a Slough Metro network which is to be developer funded via contributions. These changes are all welcomed, and it is hoped they could provide robust solutions to an impending problem.